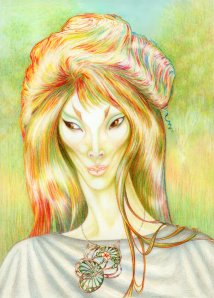 …a benign name for such an exquisite piece…

The eyes captivated me the first time I saw it. I truly wondered if they were done from life!? The sheer beauty of form of the lower face makes this her most beautiful female portrait in my opinion. Added to which the swirls of the hair individualize the character we behold.

While testing a new brand of colour pencils recommended to her, Maria has produced nothing less than a portrait masterpiece, of yes that word again, exquisite colour blend and hue. The hair is amazing in its effect upon the viewer, belying the nature of the medium itself, a magic colouration. With a technique only many decades of the use of this medium could produce, this IS Maria Lombide Ezpeleta at her finest.

No less, is Maria’s capability and skill at design. Maturing in her jewelry portrayal with this – for the final time – exquisite necklace, feature radiant design combined with flower muse.

Do you see Maria has put herself in and elder Marisol in detail in the centre of the picture between the artificial hand tools of Maedros. This work must hold a special significance for her. I addressed the issue of facial expressions in the previous ‘Moon Letters’ picture, here, if you cannot see the diversity of character, then there is no hope for you. A strikingly diverse aspects are presented, subtly telling a story in all their individual saga. The composition around Feanor, with the three more dark sons on his right, going anti-clockwise and the more en-lightened of his sons descending continuing the anti-clockwise coming, finally the wisest of them all, Maedros. Caranthir on top left leans into his father; Maedros turn away… Deep mature reading by the artist indeed, or perhaps a deep natural intuitiveness is a better description. One other aspect concerning the twins Amrod and Amras; Maria has put one in profile to distinguish their individual aspects – there is truly individual seven sons.

What is this? Non-elven Tolkien dwarves and even a hobbit. Here we have Maria stretching her vision to the Tolkien novel ‘The Hobbit’ and to a scene where Elrond (her favourite Elven Lord/boyfriend as you will see later) discovers the Moon Runes on Thorin’s map. Much as you can clearly see, to Gandalf’s discomfort. Sometimes accused of a lack of facial expressions in her Elven/Shermyjl representations, she argues that she sees them as reserved and aloof from human emotionality, something both races have in abundance in their written literature. With Arwen in exquisite jewelry and clothing framing our vision towards Elrond, here presented in all sensuality by the artist. Clearly here is a favourite subject! The background is balanced as is typical of Maria’s work – not overdone or distracting from the focus or energy the scene – yet detailed enough to keep the viewer looking for more detail.

The control of light and shading in this picture is to my mind exquisite. This, in my humble opinion, is the closest Maria gets to so-called ‘High Art’. The physical aspect of the dragons with symmetrically curved bodies; the entwined tails – a hallmark of Maria’s work – complement the entire composition. The claw holding a Silmaril-like gem presented at off-side to the foreground Dragon produces the implicit power of her/its magic. The hues of reddish make this an outstanding visual work, one that has simplicity yet deep, deep magic. A truly primal look into our Cosmos of myth.

Although J. R. R. Tolkien inspired, this work has several features that make it unique. If you take the horses and their demeanor you can see, mainly by the eyes (pun intended) that they form an equal part of the character composition. There are 17 (Saruman’s horse is (nearly) obscured) ‘members’ of the White Council in our vision. The swords presumably of the attendees represent a focal point for both the council and the picture. Note also the faint pathway through a background forest above the sword hilts signifying the pathway to our meeting place. I particularly like the portrayal of Saruman in this work, he is cast as an outsider; his horse has is hidden-unlike the others and he is more wary of what Cirdan is doing with that bowl; something left for all of us to ponder upon…

The clear presentation of the Tolkien Lord of the Rings Fellowship crossing the bridge in the background is so distinct from the river foreshore elven lovers. There is almost a three dimensional aspect to this picture. The careful blurring or fogging adds to both the atmosphere and the ambience. Indeed this seems a Photoshop collage of background and foreground. Once again the Maria Lombide Ezpeleta trademark jewelry and clothing on the lovers.